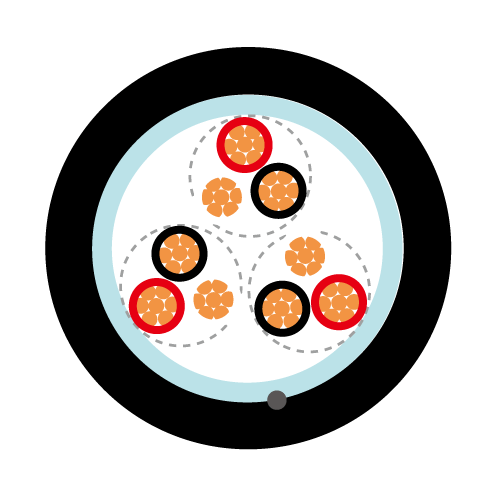 Power Copper Conductors According to IEC 60228

Correction factors according to IEC 60228

For other temperatures, correction factors are applied as below :

Instrumentation & Control Conductors According to IEC 60092-376

1. Maximum permissible service temperature of the conductor is 90℃.

2. The current ratings given above are based on an ambient air temperature of 45℃.

4. For cables with more than four core cables, the current ratings are calculated by the following formula :

I1 : Current for single core cable

The short circuit currents quoted here are for cables operating normally at maximum conductor temperature of 90℃.

XLPE insulation is actually capable of withstanding short-term temperature up to 250℃.

The reactance of a cable operating in AC system depends on many factors, including, in particular, the axial spacing between conductors and proximity and magnetic properties of adjacent steelwork. The formar is known for multicore cable, but may vary for single core cables depending upon the spacing between them and their disposition when installed.

Reactances of cables in certain dispositions remote from steelwork are calculable and are shown. The tabulated values are for cables with circular conductors. The value for a sector- shaped conductor should be taken as 90% of the tabulated value. The value of reactance so calculated is for a supply frequency of 60Hz. For any other frequency, a correction should be made in direct proportion to the frequency.

For example at 50Hz, the reactance is 0.83 times that at 60Hz. Induction for 2-and 3- conductor cables is given by the formula :

L = Inductance in H/m and phase

a = Axial space between conductor

Reactance for 2- and 3- conductor cables is given by the formula :

X = Reactance in ohm per phase

L = Inductance in H/m and phase

I = Conductor Iength in meter

Impedance for 2, 3 & 4 conductor cables is given by the formula :

Z = Impedance in ohm per phase

R = Resistance at operating temp. in ohm per phase

X = Reactance in ohm per phase

Voltage Drop (Cables Up to 1 KV)

The voltage drop coefficients in each circuit are given in the following table :